A visit to Ryvarden will submit body and soul to the force of nature. The promontory the lighthouse stands on seems to reach out bearing you towards where the huge sky meets the mighty sea. Whether the autumn storms rage and you lean into the wind, or a dead-calm lies over the water, there is a compelling feeling of awe.

You can take the half-hour’s walk out to Ryvarden for exercise or to breathe in the impressions of this special landscape. You can see an art exhibition in the gallery, and enjoy something to eat in the café.

From the windows there is a panoramic view of the sea and the sky, north, south and westwards. It’s even possible to stay out here on the edge of the ocean.

And perhaps you will see the seal that’s often nearby. He likes showing off, holding up fish he has caught teasing the seagulls: what a spectacle! If you are lucky you might also see sea-eagles, grouse and deer.
Whatever your purpose, a visit to Ryvarden will be special – you are most welcome!

Ryvarden is awarded “Olavsrosa” – the quality label for the Norwegian cultural heritage.

This brand is awarded a high quality product that has the basis of the Norwegian cultural heritage. The quality tag is awarded after a strict assessment. The assessment emphasizes the product’s cultural historical value, as it is a sign, and the product has been made available.

The gallery is a young entity but Ryvarden’s history is old. Ryvarden has been a landmark for more than 1100 years. It was a significant place in historic times, and the story of the viking, Floka with the Ravens, and his voyage from Ryvarden to Iceland is told in Iceland’s Book of Sagas. The headland with the cairn from viking times became the site of a lighthouse.
The Norwegian Coastal Authority has automated the numerous lighthouses that previously were the work-place for many employees, thereby leaving the workers’ houses unoccupied.
So that these houses shouldn’t remain empty, they have been made available for new tenants.
The buildings at Ryvarden, on the southern boundary of Hordaland county, have in this way been taken over and converted, through the efforts of the municipality and others, to Ryvarden Gallery and “A Cultural Beacon”. The Coastal Authority and Sveio Municipal Council signed an agreement in 1992 for renting the houses for use by the local community. Since then Sveio has been responsible for running the gallery and developing Ryvarden for cultural and social purposes. 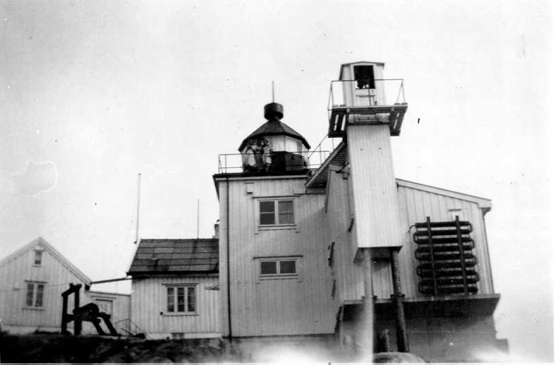 Historical background
Late in the iron-age there was a settlement at the head of Vikse fiord, home of the viking Floka Vilgerdsson, later called Floka with the Ravens. In 869AD he decided to sail westward, and while he waited for the right wind, he sacrificed to the gods and built a large cairn high on the headland here. He also cast a spell on three ravens that he took on his journey, and the story of their flying ahead so that he found land is well known in Iceland. The cairn became known as Floka-cairn, and is the earliest landmark for sailors we hear of. Later the name was changed to Ryvarden, “the Ry cairn”, probably because it marked the boundary of the Ryg clans’ territory (with the Hord-clans north of here).
After a rough time at sea Floka with the Ravens went ashore at Bardastrand in Gardaholm, as Iceland was then called. He turned out the animals he’d brought on the lush grass; he caught fish, whales, seals and birds in all the inlets and on the small islands. He was so content hunting that he forgot to harvest feed for the animals for winter, so when there was none left he had to slaughter the animals. The winter was extreme, the fiords were frozen over and the men were so discouraged that Floka re-named the country, Iceland.

After two harsh winters, Floke and his clan sailed back to Norway, but at the end of the 870’s, they moved to Iceland again. According to the sagas, Floka was one of the earliest settlers in Iceland.
The Norwegian Nadodd and the Swede Gardar Svårvarson were there before him, and some historians believe it was their reports that motivated Floka to find this land. It was at any rate Floka who called it Iceland, and he was the first to come back and settle there permanently. He lived in Skagafjordur in Nordland, and a valley and a lake there bear his name. A street in Rekjavik is named after him too (Flokegata).

The Floka-cairn stood on the point of the promontory for nearly a thousand years, and was an important landmark in this shipping-lane. In 1849 a lighthouse was built here, for the fishing-boats. It was a small wooden house, just 6 square metres with a bench and a wood-stove. The lamp hung on the wall, and was lit during the herring-season from the 21st of December to the 1st of March.
In 1861, Ryvarden got a house of 8 x 6.3 for the lighthousekeepers family. The workers damaged the most 1000 year old cairn and used the stones in the foundations of the building.
The lighthouse was rebuilt in 1891 with light from an Alladin lamp. In 1935 there was built a new house for the assistents and a new lighthouse with a motor house engine. At the same time there were mounted fog lights and the lights was changed to net burners – Petromax system. The next change came in 1957, a new house for the lighthousekeeper and a new 250W electric lamp with brightness of 7000 lightning lights and 13.4 nautical miles.

A new cairn has been built to replace the old one which was demolished.
In 1984 Parliament passed a bill to automate the lighthouses, and from July that year the days of the lighthouse-keepers out here were over. 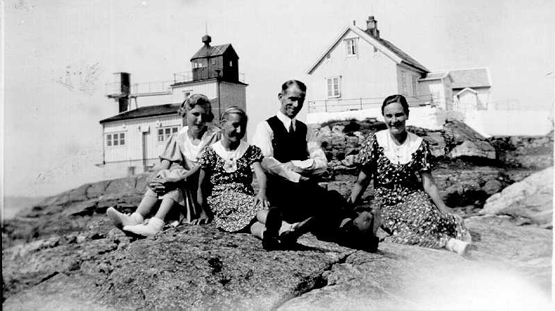